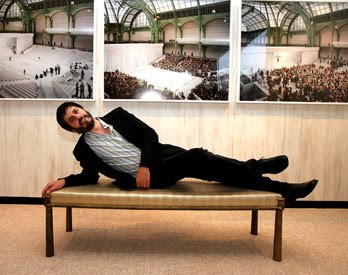 The lecture is free, open to the public and will be held in Room 103 of the LSU Design Building at 5 p.m.

Born and based in Minneapolis, Minn., Soth has received several major fellowships from the Bush, McKnight and Jerome Foundations and was awarded the 2003 Santa Fe Prize for Photography. He currently holds the title of Nadine Carter Russell Endowed Chair in the LSU School of Art.

Soth’s work is represented in major public and private collections, including the San Francisco Museum of Modern Art, the Museum of Fine Arts in Houston and the Walker Art Center in Minneapolis. Soth’s photographs have been featured in numerous solo and group exhibitions, including the 2004 Whitney and S?o Paulo Biennials. His first monograph, “Sleeping by the Mississippi,” was published by Steidl in 2004 to critical acclaim. Since then, Soth has published “NIAGARA” (2006), “Fashion Magazine” (2007), “Dog Days, Bogotá” (2007) and “The Last Days of W” (2008). Soth is represented by Gagosian Gallery in New York, Weinstein Gallery in Minneapolis and is a member of Magnum Photos.

This presentation of the LSU College of Art + Design Distinguished Lecture Series is sponsored by a generous endowment by the Nadine Carter Russell Chair and the School of Art.

To learn more about the LSU College of Art + Design, visit www.design.lsu.edu or by contact Debra Langlois at 225-578-5868 or e-mail dlanglo@lsu.edu.