Here’s what he had to say: 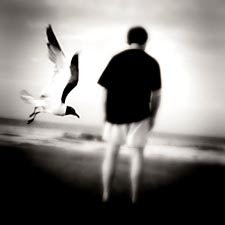 Forgoing the rarified atmosphere of most art shindigs, New Orleans Photo Alliance president Mark Sindler promised that the opening of the Critters show would be critter-friendly. ‘We may have dog fights. Who knows what will happen?” While no blood sports were reported, the photographs themselves turned out to be a highly poetic menagerie despite their occasional barnyard ambience. Curated by Keith Carter, one of the masters of neo-romantic surrealism, the final few dozen images culled from hundreds of submissions were as notable for their evocative aura as for their animal magnetism, as we see in Birdman by Tami Bone (pictured). The New Orleans Photo Alliance was formed in 2006 to help local photographers regroup after the storm and to advance the progress of photography as an art form in the region.