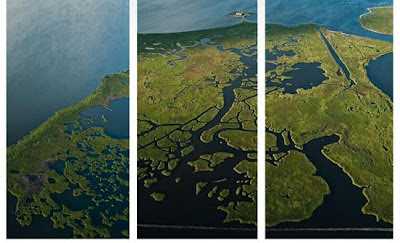 New Orleans’ Ogden Museum of Southern Art is to host a book-signing event featuring NOPA member Michel Varisco on Thursday, July 12, in connection with the release of her new book, “Shifting,” and the museum’s ongoing exhibit of the same name.

The new book includes all of the Varisco images, of the Louisiana wetlands and the Gulf of Mexico, that are featured in the exhibit. The Ogden show will run through Monday, July 23.

The museum will host a gallery walk of the exhibit on Saturday, July 21, beginning at 2 p.m.

The July 12 book-signing is being held in connection with Ogden After Hours, a regular music performance series. The event, which features the North Mississippi indie pop duo Blackbird Hour, is set for 6 to 8 p.m. this Thursday.

Varisco noted that the “Shifting” book was a labor of love, one supported by many people in the New Orleans and Southeast Louisiana region. It includes essays by Anne Gisleson (the co-editor of “How to Rebuild a City“) and curator Bradley Sumrall. The contributions from others do not stop there, however.

Those unable to attend the Ogden After Hours event may buy the book through museum’s bookstore, or buy the book directly from Varisco. You can find more information about the artist, including contact information, at her website.