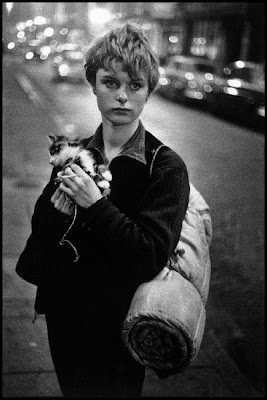 We are thrilled to offer a slideshow and lecture by living legend Bruce Davidson on the opening weekend of PhotoNOLA. Thanks to the generous support of Canon this event is free and open to the public.

Bruce Davidson began photography at the age of ten in Oak Park, Illinois. In 1947, at the age of 16, he won his first prize in the Kodak National High School Competition. He went on to attend The Rochester Institute of Technology and Yale University. After military service in 1957, he worked as a freelance photographer for Life Magazine and in 1958, became a member of Magnum Photos, the international photography agency.

Davidson continued to photograph extensively from 1958 to 1965, creating such bodies of work as “The Dwarf”, “Brooklyn Gang”, “England/Scotland” and “The Civil Rights Movement”. He received a Guggenheim Fellowship in 1962 to document youth in the south during the civil rights movement. The work included the cities of Selma, Montgomery and Birmingham, Alabama, as well as an earlier story on the Freedom Riders. In 1963, the Museum of Modern Art in New York presented his work in a “one man” show that included, among others, these historically important images.

In 1966 he was awarded the first grant for photography from the National Endowment for the Arts, and spent two years documenting one block in East Harlem. This work was published by Harvard University Press in 1970 under the title “East 100th Street” and became a solo exhibition at the Museum of Modern Art in New York that same year.

Bruce Davidson is a 1998 recipient of an Open Society Institute Individual Fellowship and was awarded the Lucie Award for Outstanding Achievement in Documentary Photography. He continues to work as an editorial photographer and a comprehensive documentarian. His work appears regularly in publications all over the world.

He lives in New York with his wife and has two grown daughters.

This event has been coordinated by the New Orleans Photo Alliance in partnership with the Historic New Orleans Collection and the Gulf South ASMP.