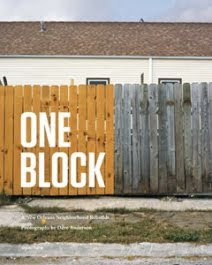 Tune in to WWL-TV at 8:40 tomorrow morning to here him talk about the project.

One Block: A New Orleans Neighborhood Rebuilds follows the reconstruction of a single New Orleans block from 2006 to 2010 in the wake of Hurricane Katrina, delivering a powerful portrait of the storm’s ongoing physical and psychological impact on the city and its residents. Using portraiture, still lifes, and abstract images, Dave Anderson documents the evolution of both the street and its houses as residents rebuild, exploring the very nature of community while testing its resilience. Join photographer Dave Anderson for a talk and book signing on the occasion of the release of the new Aperture monograph One Block.