Desire & Friday Night at The Palace Reviewed in Gambit 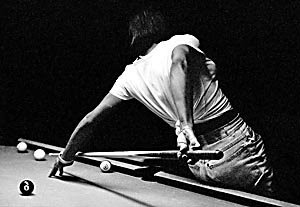 FEBRUARY 21, 2009
Friday Night at the Palace and Desire

Near the intersection of St. Mary Street and Sophie Wright Place are two of Uptown’s main photographic venues, the Darkroom and the New Orleans Photo Alliance Gallery. Both feature similarly obsessive and shadowy subject matter: pool halls and desire. Jackie Brenner’s Friday Night at the Palace pool-hall series hints at her better-known stripper studies. Featuring stark, black-and-white views executed in a style somewhere between film noir and social work, it suggests how gracefully dancer-like pool players can be. But where her strippers’ inner lives were revealed in close-ups of personal detail, here the pool-player psyche appears in the facial expressions and body language of competitors armed with pool cues. So we are left with a sense of the game as chess for contortionists, as we see in an image of a player attempting a tricky shot with a cue behind his back (pictured). 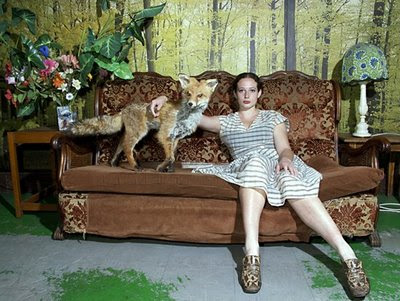 Woman With Fox At Kent by Catherine Gomersall

Desire, at the Photo Alliance, can seem a little oblique at first, but that may have to do with curator Mayumi Lake’s own proclivities as a photographer of quirky eroticism. The show runs the gamut from subtle to blatant, with the former including such ambiguities as Steffanie Halley’s shot of a pretty redheaded girl sporting what may be a love hickey, or just a brush burn on her neck. Tones of pink and green run rampant through more glaring works articulating erotic quirks with John Waters-like abandon. Some of the most interesting images feature a sort of blatant ambiguity: Andrea Caldwell’s cute girl sipping wine as the Iraq war unwinds on TV, or Catherine Gommersall’s photo of a young woman having a meaningful relationship with a stuffed fox in a room that might make Waters green with envy.

Note: The New Orleans Photo Alliance Gallery is now open on Sundays too!!
You can view the current exhibition Fridays 3-6, Saturdays 12-4 and Sundays 12-4.