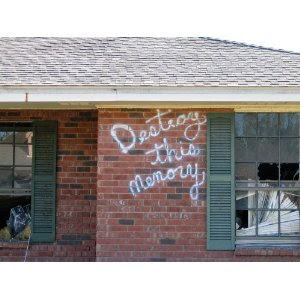 The photographs in Richard Misrach’s Destroy This Memory (Aperture, August, 2010) are an affecting reminder of the physical and psychological impact of Hurricane Katrina as told by those on the ground, and seen through the lens of a contemporary master. Rather than simply surveying the damage, Misrach—who has photographed the region regularly since the 1970s, most notably for his ongoing Cancer Alley project—found himself drawn to the hurricane-inspired graffiti: messages scrawled in spray paint, crayons, chalk, or whatever materials residents and rescue workers happened to have on hand. At turns threatening, desperate, clinical, and even darkly humorous, the phrases he captured—the only text that appears in the book—offer unique and revealing human perspectives on the devastation and shock left in the wake of this disaster.

Destroy This Memory presents previously unpublished and starkly compelling material, all of which Misrach shot with his 4 MP pocket camera while also working on a separate archive of over one thousand photographs with his 8-by-10 large-format camera. Created between October and December 2005, this haunting series of images serves as a potent, unalloyed document of the raw experiences of those left to fend for themselves in the aftermath of Katrina. With no essay, titles, or even page numbers in the way, the words on these homes, cars, and trees offer a searing testament that continues to speak volumes, five years since their original inscription. Artist’s royalties for this project are being donated to the Make It Right Foundation, which is currently rebuilding the Lower Ninth Ward of New Orleans.

Misrach also conceived an exhibition of these photographs to be presented at five major museums across the country. The five participating museums to whom Misrach donated this extraordinary group of images are the Museum of Modern Art, New York; the National Gallery of Art, Washington, D.C.; the Museum of Fine Arts, Houston; the San Francisco Museum of Modern Art; and the New Orleans Museum of Art.