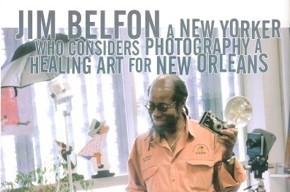 Supporters of Jim Belfon, NOPA member and founder of the Gulf South Photography Project, a service that provided photo instruction to more than 1,200 youth and senior citizens in post-Katrina New Orleans, are seeking financial assistance for the photographer as he struggles with with late-stage prostate cancer.

Belfon’s supporters, in New Orleans and his native New York, are looking to raise $15,000 within the next three weeks.

Checks and money orders may be sent in support of Belfon online, through a fundraising page at the website gofundme.com, or to the following address:

Belfon, it should be noted, is now in hospice care. Consequently, he has asked friends to reach out to persons who might be able to help him complete some photo printing work, as well as some possible photography work. Persons who can provide assistance may call Belfon at (504) 579-4346, or contact Ted Quant by phone at 504-473-0009 or by e-mail.

After moving to the Crescent City eight years ago, Belfon not only led photo education workshops, but helped people deal with the destruction brought by Hurricanes Katrina and Rita and their aftermath by providing more than 14,000 individual and family portraits.