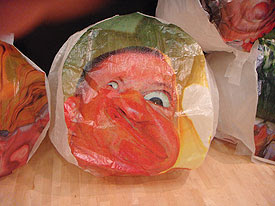 FLOATULENTS: Inflatable Photographs by Martin von Haselberg, June 10 to September 6
Martin von Haselberg (a.k.a. Harry Kipper) was a member of the infamous London and Los Angeles-based 1970s performance art duo, The Kipper Kids. Also in the early ’70s he began evolving his deeply psychological public performance work into personal photographic self-portraiture, a practice which he continues today. His artistic lineage leads the viewer from the slapstick clowning of Spike Jones to the heightened abreaction of the 1960s Vienna Aktionists. In this, von Haselberg’s first American museum show, his latest photographic experiments are presented as inflatable works, which instead of rising into the air, rest upon the floor as sculptures. “FLOATULENTS” are air balloons in the sense of Warhol’s 1964 “Silver Flotations,” but they are more than mere design. Von Haselberg describes these new works as “time-based,” as springing from the facial contortions and grimaces of his performances. FLOATULENTS is the third in the _museological exhibition series, organized by Diego Cortez, Freeman Family Curator of Photography.