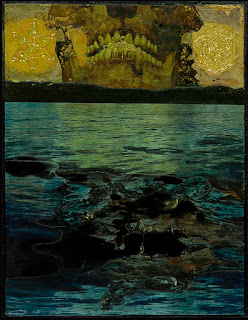 Works from NOPA members including Lynda Frese and Michel Varisco are being exhibited at the Old Ironworks Gallery, located at 612 Piety Street in New Orleans’ Bywater neighborhood, as part of a larger group exhibition called “Multi-Species Salon 3: SWARM: Hope in Blasted Landscapes.” The show will run through Sunday, Dec. 5.

The exhibit formally opened on Saturday, Nov. 13. The exhibit is being held in connection, however, with the American Anthropological Association’s 109th Annual Meeting, which begins today in the Crescent City and will run through Sunday, Nov. 21.

Several conference attendees have been invited to be “embedded art critics” for the exhibit, which will explore relations between humans and other creatures, as well as multi-species survival in the wake of disaster.

Frese will be exhibiting work from her “Pacha Mama: Earth Realm” series for the exhibit. Her works combine egg tempera painting with photography, and involve imagined religious iconography. The work is influenced by the Italian Renaissance and the Mayans’ year 2012 prophecies regarding an apocalypse or end times.

Varisco, meanwhile, will be showing photos from “Fragile Land.”

For more information on the SWARM exhibit, you may visit its website.