The maker of a documentary film focusing on the relationship between a fashion designer and a war photographer—Sebastiano Tomada, who presented and discussed his work for PhotoNOLA 2011’s “Picturing War” panel–is seeking funding for the work’s completion, via the Kickstarter crowd-funding website.

The film, “Embedded,” will look at how the typically dangerous assignments and extensive travel involved in war photography affected the relationship between Tomada and New York-based fashion and handbag designer Gessica Smith. The film is to include footage from the field, taken in connection in Tomada’s work in Syria and Afghanistan. 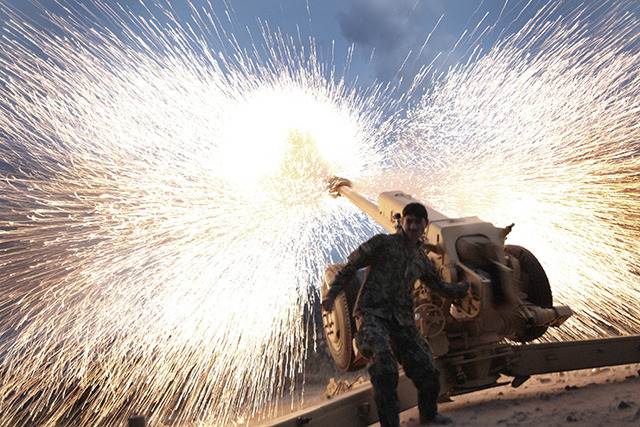 As of the afternoon of Saturday, March 23, Brooklyn-based filmmaker and photographer Madeleine Pryor’s fundraising campaign was to continue for another 19 days. to the deadline of Friday, April 12. Individuals had pledged just under $5,200 in donations, toward a goal of $10,000.

As with all Kickstarter projects, if the “Embedded” campaign fails to meet its financial goal by its deadline, then it will remain unfunded, and people pledging funds will not be charged any money.

Photographers might want to note that, if the project is funded, those who pledged $150 or more will receive a portfolio review from Tomada, as a reward.

For more information, please see the project page for “Embedded” at Kickstarter.

Image: One of the Tomada photos featured at the project page for “Embedded.”