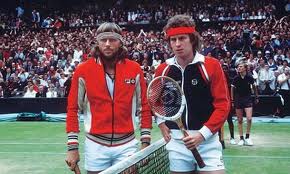 HBO Sports, which is producing a one-hour documentary on the classic, professional tennis rivalry between Bjorn Borg and John McEnroe that is scheduled to air on cable network next spring, is looking for images and video from a match that the two played in New Orleans in 1979.

More specifically, the doc’s producers are looking for photos or footage (as well as, if possible, radio coverage, a tournament brochure or program, or a ticket stub) from the match, which took place on March 24, 1979. It was a semi-final match, which McEnroe won 5-7, 6-1, 7-6.

The match was part of the New Orleans Tennis Festival, and was held at the Municipal Auditorium. A representative for HBO Sports noted that McEnroe and Borg have been interviewed for the documentary already, and that the men shared a story about something that happened during the match. Consequently, the producers need visuals to help tell the players’ story.

Image: Borg and McEnroe in their hirsute heyday, but not in the Crescent City.