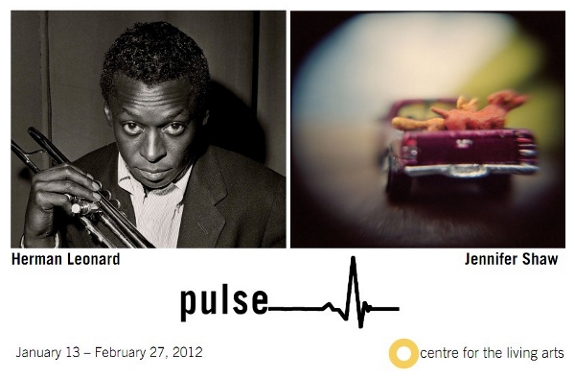 An exhibit of work by two photographers who have called New Orleans home, including the late Herman Leonard and former NOPA Secretary and current PhotoNOLA Coordinator Jennifer Shaw, will be presented by the Center for the Living Arts (CLA) of Mobile AL, beginning Friday, Jan. 13.

The opening reception for the exhibit, “PULSE,” will be held at the exhibit venue-the CLA’s Space 301 gallery in Mobile–Friday from 6 to 9 p.m.

According to the Centre, the exhibit of the memory-infused Shaw and Leonard photos–which focus on Shaw’s Hurricane Katrina evacuation experience, and Herman’s iconic images of American jazz musicians, respectively–will make for a relevant run-up to a nine-month CLA initiative that opens in the spring, “The Memory Project.”

The “Pulse” exhibit will run through Monday, Feb. 27.

The photos from Shaw will come from her series and book, “Hurricane Story.” In the series, Shaw uses dolls and children’s toys and dolls to depict her family’s post-Katrina evacuation experience, which included the birth of her son.

The Leonard segment of the exhibit, “Above All, Enjoy the Music,” will feature 40 of the most well-regarded works of Leonard, known for images of such major jazz icons as Miles Davis, Duke Ellington, Louis Armstrong and Billie Holiday, among others. He lived in New Orleans for 14 years, moving only after Hurricane Katrina in 2005. He passed away in August 2010.

Image: Courtesy of the Centre for the Living Arts