NOPA members’ ‘E2’ works to be exhibited at Netherlands festival 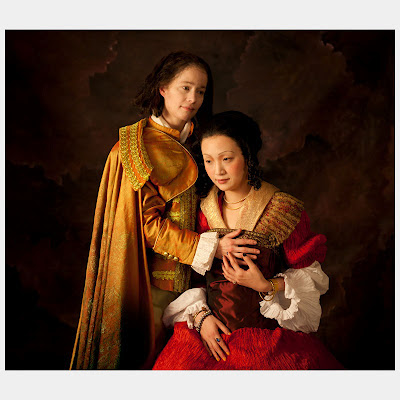 NOPA members Elizabeth Kleinveld and Epaul Julien will have collaborative works from a series based on iconic imagery from paintings, photography, film and literature–and meant to spark discussion about stereotypes and prejudice–exhibited this summer at the Dutch national Zomerexpo 2012 art festival of the Municipal Museum of The Hague, Netherlands (Gemeentemuseum Den Hague).

According to the Octavia Art Gallery of New Orleans, which represents Kleinveld, the collaborative work selected by the Zomerexpo jury was submitted under the name “E2.” The photographers’ series of remakes of a “with a twist” sort was created with the cooperation of the Dutch National Theatre, which provided many of the costumes, wigs and props seen in the images.

The E2 selections chosen for Zomerexpo 2012 are “Ode to Rembrandt’s Jewish Bride” (shown above) and “Ode to the Pinching d’Estrees Sisters.” They will be on exhibit from June 15 to August 19, 2012.

Kleinveld and Julien, who hail from the Crescent City, previously worked together on the Before During After” project, which involved exhibits and a book of the same name, with the subtitle “Louisiana Photographers’ Visual Reactions to Hurricane Katrina.” The gallery suggests that their interest in addressing stereotypes and prejudice grew out of that experience.

Other works form the E2 series can be viewed at the Octavia and Kleinveld websites.