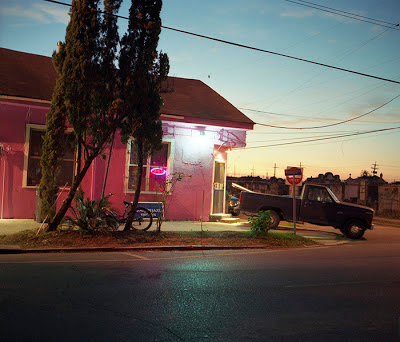 NOPA member Sophie Lvoff and her color photography work in New Orleans are showcased this month as part of the “Eyes on the South” series of the Oxford American magazine’s website. The series, curated by photographer Jeff Rich of Savannah, Ga., regularly features emerging or student photographers from the American South.

At the literary publication’s Internet home, Rich gives readers a close look at Lvoff’s “Hell’s Bells/Sulfur/Honey”series, one that focuses on the feel and urban environment of the Crescent City.

The city is full of color in the photos as you would expect, Rich notes, but no people are shown. Instead, he notes, “The true subject of this work seems to be the colors and heavy air that hangs over everything in this city surrounded by so much water.”

The feature and photos can be found here, at the Oxford American site.

In addition to being an Alliance member, Lvoff is a member of Good Children Gallery, an artist-run gallery in the St. Claude Arts District of New Orleans. She is a Master of Fine Arts candidate in studio arts at Tulane University. Photos from the series showcased at the Oxford American, and many others, can be found at her website.