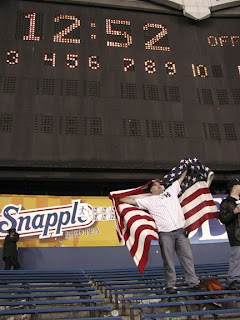 “Mr. November”
After the September 11th terrorist attacks, the baseball season was put on hold. Because of this, the playoffs started later, and Game 4 of the 2001 World Series was played on October 31. The game went into the tenth inning tied at 3–3. At midnight, the scoreboard in center field read “Attention Fans, Welcome to NOVEMBER BASEBALL.” This was the first time that any non-exhibition baseball game had been played in the month of November.

Moments after this message was displayed on the board, Jeter sent a 3–2 pitch from Byung-Hyun Kim over the right field stands. A fan in the stands held up a sign with the words “Mr. November.” Michael Kay, who called the walkoff home run, called Jeter by this name, referencing the sign.

I was lucky to be at this game. It is considered to be the best back to back to back baseball games in World Series history.