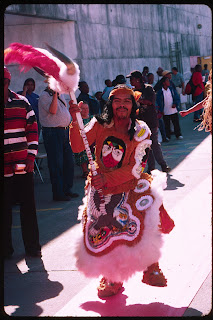 Wild Man Loco of the White Eagles Mardi Gras Indian group has a special request. Loco lived in the 8th ward and all of his Mardi Gras archives were destroyed by the flooding that occurred after the post-Katrina levee breaks. He is requesting copies of video of him doing to quote him, “the Wild Man thing.” He is willing to pay the cost of duplication or fee for any footage of him in his Indian Suit.

Loco’s flood water damaged crown (headdress) was featured in the Chris Rose column, One Dead in the Attic in late 2005. Shortly after the crown was featured in the newspaper it was stolen. Thank you for any assistance you can offer Loco, a true living legend.