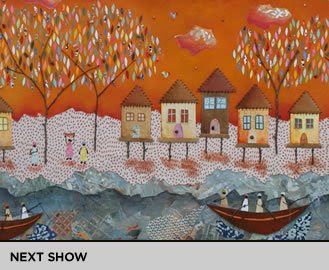 South of I-10:
Artists Along Louisiana’s Main Drag

RAMSEY AYERS
From London to L.A. her artwork is collected amongst those with an eye & appreciation for both color & texture. Ramsey Ayers’s mixed media acrylic collages were viewed world-wide when she was the chosen artist for Festival International’s 2006 cover poster. She was spot-lighted in New Orlean’s “Gallery Insider” in 2007 and has created numerous covers for Baton Rouge’s Country Roads Magazine throughout the past three years. Her exhibits have remained solely in her hometown until now; this CANARY group show marks her first exhibit outside of Lafayette.

TJ BLACK
An accomplished Baton Rouge blues musician since early on, has acheived some success as an artist, combining vivid acrylic imagery on textured wood, industrial elements such as drilled holes and bolts, and written text, which acts as much as image as it does a representation of a sound-event.

Black recently returned to Baton Rouge after honing his craft for five years in New Orleans. “It wasn’t until I was in New Orleans that I started painting seriously,” Black said. After working for several years as a waiter and a bartender, living week to week, Black decided to quit his day job, take his last $100 and invest it in his art. The result of this endeavour has opened him a gallery in Baton Rouge and collectors throughout the South.

SAMUEL PORTERA
Samuel Portera was born in New Orleans and raised in St Bernard Parish where he lived with his wife Jennifer and their daughter Allison until Hurricane Katrina. His photographs have appeared in such publications as B&W Magazine, Shots, Oxford American, and Habitus Magazine. His current body of work, “Alluvia” is an evocative view of the fading Louisiana wetlands, and currently being exhibited at SOHO Photo in New York, and featured in Fraction Magazine.

HEIDI DOMANGUE
Hailing from Chacahoula, LA, Heidi Domangue has been working, teaching, and performing in the arts for over 10 years. An accomplished dancer, teacher, and artist, Heidi’s current work in the South of I-10 show features her work in mixed media.