Terri Garland: Southern Discomforts comprised of some fifty photographs made over the past twenty years with “southern themes”, including white supremacists, vernacular artifacts, post-deluge calamity, and family members of those who suffered racially motivated violence. 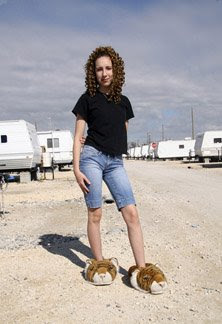 It’s hard to believe that in 2008, at a time when an African-American is running for President of the United States, hooded figures are still scampering around the countryside burning crosses and spewing their racial vitriol. It is hard to believe that after three years, and all the negative press attending the bungling attempts at rebuilding, New Orleans, and many of the communities of the Mississippi Gulf Coast are still largely wastelands.

As Ms. Garland writes, “The pictures made in Louisiana and the towns of the Mississippi Gulf Coast following the hurricanes of three years ago are rooted in my observations of a less overt but equally insidious brand of institutionalized racism. Neither satin robes nor burning crosses were in evidence, but the issues of class and ethnic inequities were impossible to ignore. Due to long-term neglect and the persistent devaluation of life through economic oppression, a culture of death, bereft of any and all compassion, has evolved in New Orleans and has dramatically been exacerbated since the storms. Like the ribs of a starving dog, the despair is palpable in many parts of the city. The cross still burns.”

These pictures are about the sadness and grim traditions, which are still revered and celebrated by many in the South. However, despite her visual condemnation of ingrained patterns of racial attitudes and intolerance, it is clear that Ms. Garland also holds a strong affection for this part of the country, and the way it simply looks. She remarks that, “the dichotomies of the South hang like rotting fruit on brittle limbs of an old tree, but what I am beginning to discover is some small fragment of salvation beyond the margins of the obvious.”

The stillness of Ms. Garland’s powerful and damning images is a mirror of strength and neglect. And the bitterly ironic words of the well-known song remind us, in the end, that “King Harvest has surely come.