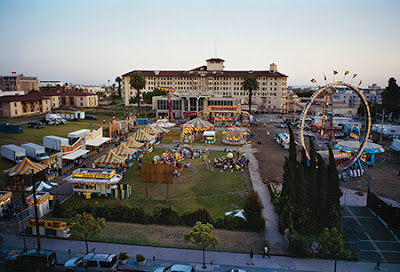 Photographs taken by Tulane art professor and NOPA member Stephen Hilger‘s series of color photographs of the famed and now-demolished Ambassador Hotel of Los Angeles will be on exhibit in January 2012 at the MUSE Center of Photography and The Moving Image in New York.

In the “Hotel California” exhibit, large-scale color photos from Hilger will be shown alongside photos and ephemera from the files of the Ambassador Archive, an online project of Hilger and collaborator Annie Shaw.

For those unaware of the hotel’s historical significance: It was the site of several Academy Awards ceremonies in the 1930s and 1940s. It later became perhaps better known, nationally, as the site of Robert Kennedy’s assassination of June 1968. The Ambassador was demolished in 2006.

Hilger directs the photography program with the Newcomb Art Department at Tulane’s Uptown campus in the Crescent City.

For more information on the MUSE Center’s exhibit, you may visit its website.