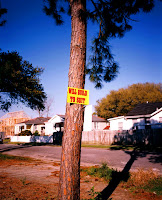 I will spend one full day in New Orleans escorting the winning bidder on a photo shoot throughout the city. The outing will include lunch in the French Quarter at the famous Napoleon House. We will visit locations (Bywater, Marigny, French Quarter, Irish Channel, Lower Ninth Ward, Lakeview) where I have made many of my images which have appeared in books and museum exhibitions. The outing will occur within one year of the winning bid, on a day mutually agreed upon by both parties.

Above: Will Build to Suit, New Orleans LA 2004, W. Greiner from the series Homefront.

To support the same cause, Greiner recently sold his monograph book, “The Reposed,” and an exhibition print on eBay for over $300.